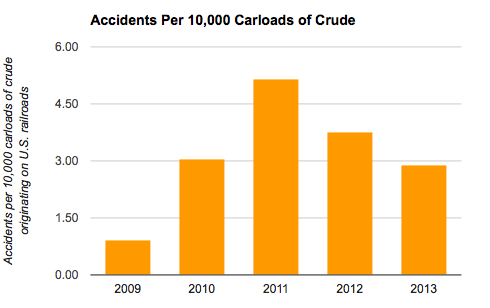 As more and more crude oil travels by rail, the number of railroad accidents involving oil are on the rise, Politico reports. But whether crude-by-rail’s safety record is actually getting worse remains an open question: Are crude-by-rail accidents growing faster than shipments, or are they simply keeping pace?

There are a few ways to measure the severity of an accident:

Politico published the number of crude-by-rail incidents, by year, from the Pipeline and Hazardous Materials Safety Administration (PHMSA) database and the monetary damages (in dollars) of those incidents. So for now, we’ll focus our analysis on those metrics.

Here’s what the crude-by-rail incidents (accidents,  derailments, spills, etc.) per year and damages per year look like on their own:

There’s a clear rise, over the past five years, in both total incidents and monetary damages caused by those incidents.

But here’s what this same data looks like when you normalize for the increase in crude-by-rail shipments – that is, if you divide incidents and damages by the number of carloads of crude traveling on U.S. rails that year:

Looking at the data this way, the rise in accidents isn’t as sharp and the trend isn’t as clear as reported by Politico.

Of course, the number and severity of spills per carload of oil traveling on rails may ultimately be irrelevant. For people living in communities where oil rumbles by on a daily basis, there’s only one acceptable spill rate: zero.