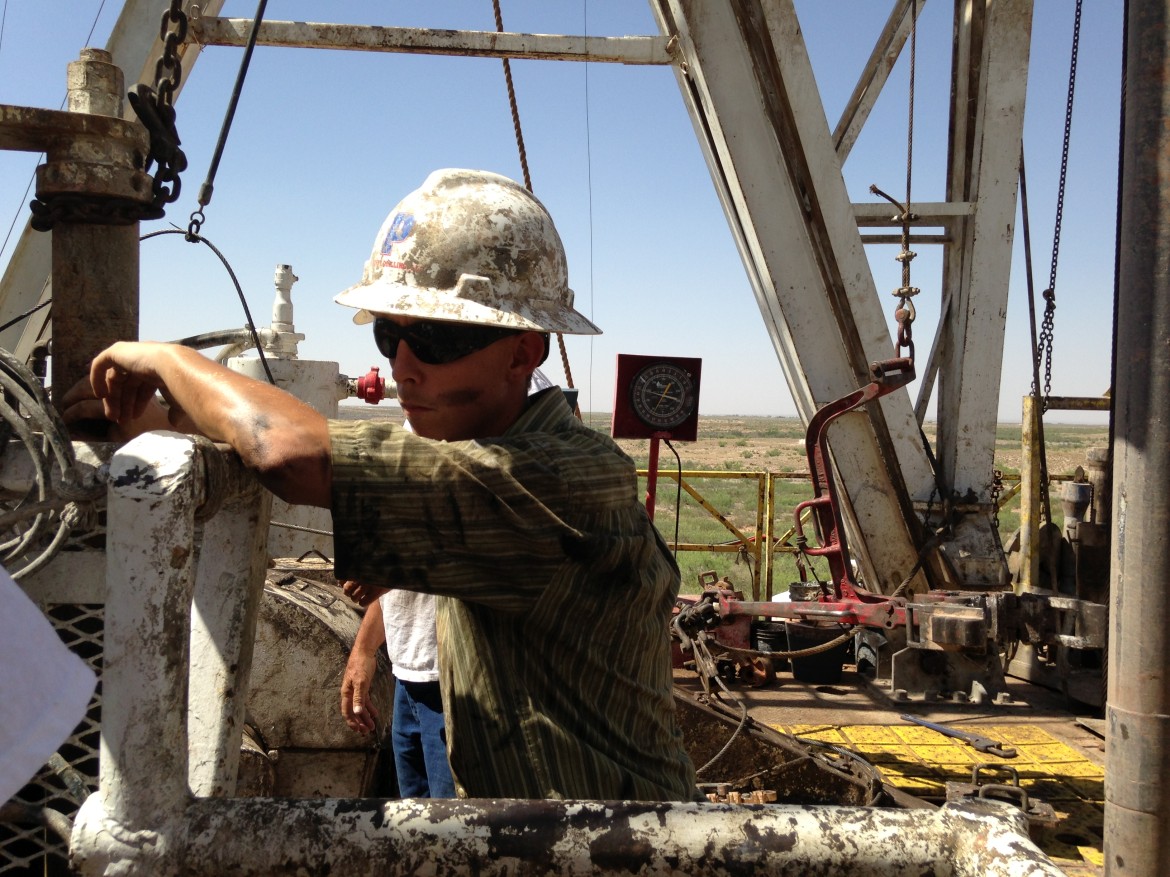 There’s a saying in southeast New Mexico that if God intended for there to be oil drilling, he picked the right kind of country for it. Out here the land is desolate. No trees, no mountains, just sky. A blue dome that arches over gentle slopes covered in prickly plant life.

The greatest elevation change here is atop a drilling rig. One rig outside Lovington reaches 24 feet in the air and goes down more than a mile.

Oil production in New Mexico has shot up 70 percent since 2008. The number of active wells across the state has grown to 60,000. Compare that to the number of state inspectors who check those wells. Statewide there are just 14.

Ron Harvey is one of them. “I have almost 8,000 wells, just me,” Harvey said. Eight thousand wells is more than most other inspectors. Harvey claims if he’s lucky, he inspects each one once a year.

Harvey works for the Oil Conservation Division. It’s the agency that regulates the oil and gas industry in New Mexico, and its inspectors are the police officers of the oilfield. It’s difficult for the state to retain them because they can double their salary if they work for an oil company.

“It’s kinda hard to compete with industry as far as pay wise, benefits stuff like that,” Harvey said.

The lack of enforcement staff makes keeping up with the workload impossible. According to OCD records, 40 percent of the wells in New Mexico were never inspected in 2013. That can put workers and the environment at risk. For example, a well that fails a pressure test could result in a deadly blow out. A leaky well can contaminate soil or groundwater.

“A lot of the time, to tell you the truth, I don’t write them up for well signs because we don’t have enough people where we can do follow-up,” Harvey said. Not having a well sign is considered a minor violation — one among thousands that OCD’s 14 inspectors must manage. When an operator breaks the rules, inspectors can send a letter of violation.

“There are some guys out there that just, you know, you’ve sent them an LOV and they’ll just wad it up and throw it in the trash can,” Harvey said. “They don’t care.”

Six years ago the OCD was sued by a local oil company and had to stop issuing fines for violations under the state’s Oil and Gas Act. Inspectors still have the option to deny permits to drill new wells or transport oil, but the process can be cumbersome and lengthy.
“I believe that OCD ought to have more authority as far as the fines and the enforcement and things like that,” Harvey said.

Staffing and enforcement aren’t his only concerns. Harvey’s 2008 Dodge pickup has 144,000 miles on it. It takes a severe beating in the oilfield where roads are sometimes nonexistent. His old desk computer takes five minutes to boot up.

Chris Williams, a retired district manager for the OCD, said he isn’t surprised. He said it was a constant struggle to get support from OCD headquarters in Santa Fe. “They are not doing anything about it,” Williams said. “They are not going to the legislature and saying, ‘Hey, we’re getting hammered out here because we don’t have the money to do anything.'”

Year after year the OCD’s budget represents less than one percent of the total tax revenue the state collects from the oil and gas industry. That revenue topped $1.7 billion in 2013. “The people in New Mexico really are not getting their money’s worth, is what it boils down to,” Williams said.

As of late December, the OCD had one open slot for a field inspector. In the next legislative session, which begins Jan. 15, OCD will ask lawmakers for nine new positions. Three would be for field inspectors.

But with the ongoing decline in oil prices, New Mexico has already cut this year’s projection for new revenue in half. That will make additional money for the OCD a tough sell.