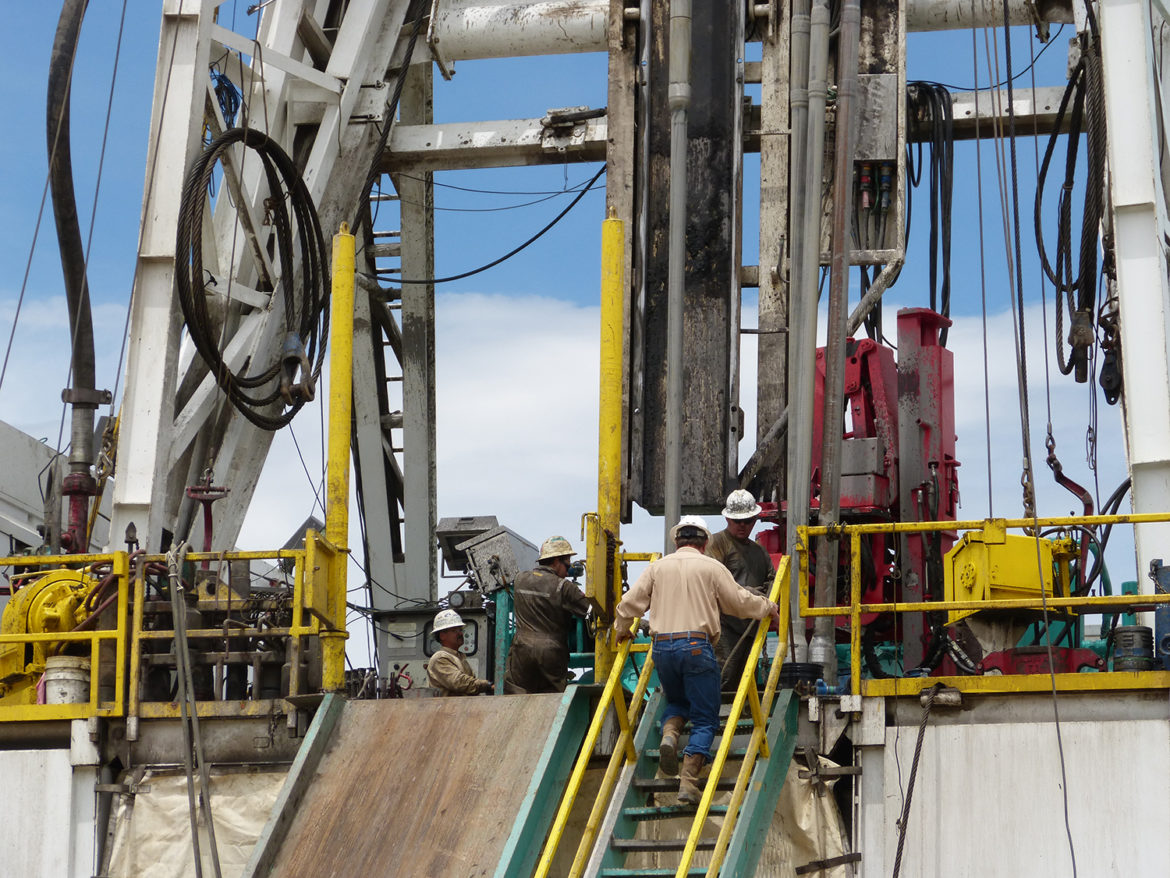 Workers on a completion rig, Weld County, Colorado. On the job fatalities are more than eight times more likely for people working on oil and gas wells than in other industries according to the Bureau of Labor Statistics.

That’s what we will try to lay out in this story, with some important caveats to keep in mind:

When assessing the risk of health hazards around oil and gas development, researchers take into account how likely a hazard will occur – the probability – and how dangerous that hazard could be. If you make it less likely for that hazard to occur, and find ways to protect people, then risk is lessened.

While oil and gas development has always been a dangerous job for workers employed in the industry, the wider dangers to nearby communities is something that is only recently become an issue as homes and communities come closer and closer to drilling.  We will explore both the dangers to workers and to those in nearby communities.

The word “fracking,” or more formally, hydraulic fracturing, is typically used in the oil and gas industry to describe one part of the process of creating a well – the part where a slurry of sand, water, and chemicals is pumped underground at high pressure. However, the hazards of oil and gas development are associated with all kinds of drilling, not just fracking. So in this answer, we are first taking a wider view and describing hazards from all parts of the process of drilling and maintaining wells.

Three categories of dangers are described below. Noise-dampening temporary walls – visible in the foreground on the right and behind the rig – are often put around drilling and completion rigs to prevent noise in the local community.

Vehicle accidents are the cause of more than a third of the deaths of oil and gas workers. Drilling and completing an average well can require more than 1000 truck trips through a residential area to bring equipment, pipe, water for drilling and fracking, chemicals, and sand to the site according to a Government Accountability Office report. The increased truck traffic can also cause vehicle accidents in the community.

Fires and explosions at wells and pipelines can affect the surrounding community, too. Explosions are rare, but they can happen. An Inside Energy analysis of spills, fires, and explosions in Colorado found that there have been more than 1,600 leaks reported in the past three years and between January 2016  to July of 2017,  at least 24 fires and explosions related to oil and gas have been reported, including the massive explosion in Firestone, Colorado that killed two people in April.

Earthquakes, while typically small, are a hazard faced by communities with disposal wells where wastewater from drilling and fracking of wells is pumped deep underground. For example, Oklahoma, a state not typically prone to earthquakes, is now rocked by many small and some medium sized earthquakes regularly due mainly to wastewater disposal wells and the number of quakes in Oklahoma rivals that of California. Since Oklahoma placed regulations on wastewater wells in 2016, the number of earthquakes has been declining. Pumpjack and flaring in North Dakota

Emissions from the well can include methane and hydrogen sulfide. Emissions are also released from gas that is flared (burned) at the well, including nitrogen oxides – the building blocks of ground-level ozone. Dust from the sand used in fracking fluid can become airborne and is dangerous to breathe. Hydrocarbons – such as benzene and toluene – also get into the atmosphere and can cause leukemia and other types of cancer as well as other health problems.

Diesel emissions from truck traffic and generators are a large source of air pollution in areas with oil and gas development and are not contained to the well site. Truck traffic adds to the emissions from diesel generators and equipment at the well site. Diesel emissions include more than 40 toxic air contaminants including many that are known to cause cancer according to the International Agency for Research on Cancer.

Spills are a threat to water quality. Modern unconventional drilling methods – i.e. fracking –  increase the potential for spills as compared with older, conventional wells because they rely on more water and chemicals at the well site for drilling and fracking. Up to 16% of hydraulically fractured oil and gas wells spill liquids every year according to a study of spill data from Colorado, New Mexico, North Dakota, and Pennsylvania. They found that most reported spills (70-94%) occur in the first three years of a well’s life. Half of the reported spills were from materials stored in tanks and pits and transported via trucks or pipelines.. Spills can happen at many points in the process of drilling and maintaining wells and transporting oil, gas, and waste according to reported spills from 2005-2014 from four states, analyzed by Dr. Lauren Patterson and her colleagues.

Spilled liquids can include hydraulic fracturing fluid used to crack open rock deep underground, drilling mud used to cool the drill bit and transport rock cuttings to the surface, produced water that comes from deep underground and can include radioactive elements, and oil or other hydrocarbons. All of these liquids include compounds that are hazardous to our health.

Chemicals in hydraulic fracturing fluid serve many purposes. Most of the fluid is water and sand and less than 1% is chemical additives. Unfortunately, some of those chemicals are toxic in very small quantities so 1% is more than enough to be dangerous.

To identify what components of hydraulic fracturing fluid put our health at risk, Jessica Rogers and colleagues developed a method for identifying the chemicals of greatest concern. They identified which chemicals used in fracking fluid are toxic, and then identified the subset that stick around in the environment without breaking down and are able to move into groundwater.

The distance from an oil and gas well affects the risks.

We’ve outlined the different kinds of hazards that oil and gas development can pose to workers and to communities.  But these threats are very different depending on your distance from the wells, according to a review of existing research. Based on Adgate et al, 2014, showing the types of hazards that affect areas close to a well and further from a well.

At a well site, accidents can occur during drilling and fracking a well. Workers can be exposed to hazardous chemicals and poor air quality. Loud noise can have an impact on workers hearing and they are at risk of inhaling particles of silica sand, which are a component of hydraulic fracturing fluid. The Department of Labor OSHA standards for the oil and gas industry are designed to limit the risks for workers, however dying on the job is more likely for people working on oil and gas wells than in other industries according to the Bureau of Labor Statistics, and as we reported above.

The community near a well is affected by truck traffic, noise, and poor air quality as the well is being drilled and completed. The stress associated with community change in areas with oil and gas development can also be a hazard to mental health. Local water resources can be contaminated if spills occur. Exposure to chemicals used in oil and gas development can be hazardous. Depending on the concentration of chemicals that make it into the air and water, people living near wells can be at higher risk of neurologic, developmental, endocrine system problems, poor respiratory health, and cancer.

But there is much more to learn about what health effects are occurring and this is an area of active research. In a Colorado-based study, researchers found that children living closer to oil and gas wells had increased risk of developing cancer. In another Colorado study, researchers found evidence of higher rate of birth defects among children whose mothers, while pregnant, lived near a high density of natural gas wells. In its own report, the Colorado Department of Public Health and Environment (CDPHE) found limited evidence of harmful health effects of oil and gas development, but admitted there were few  high-quality studies to make that determination. The CDPHE report states that “at this time, results from exposure and health effect studies do not indicate the need for immediate public health action, but rather indicate the need for more detailed exposure monitoring and systematic analyses of health effects of residents living near oil and gas operations.” In areas like Weld County, Colorado, such as this satellite view near the intersection of highways 7 and 66 in Mead, neighborhoods and the oil and gas industry compete for space and people are often living in close proximity to wells and other oil and gas infrastructure.

What if you live 25 or 100 miles from an area with oil and gas development? Are there still dangers that you face?  On a larger, regional scale, oil and gas wells can have an impact on water and air quality depending on the amount of pollution and whether it travels into other areas. However there have been few regional-scale studies to examine the impacts on health.  Additionally, in arid regions, drilling and fracking can place a strain on availability of freshwater at a regional scale.

Globally, oil and gas wells affect climate change by increasing greenhouse gas concentrations from well and pipeline methane leaks and carbon dioxide emissions from burning the oil and gas. Climate change affects our health in many ways such as increasing the intensity of severe storms like hurricanes, which puts people in harm’s way, and increasing incidents of drought, flooding, and heat waves, which limits people’s access to drinking water and threatens agriculture.

Despite all the research linked to above, there are still many unknowns about how dangerous oil and gas development can be to workers and to nearby communities.  More studies are needed to quantify:

All of this research is going on in a political environment that is increasingly fraught, as some communities and individuals believe the risks of oil and gas development are too large, while others believe the risks are worth the economic gains.  That is all playing out on the local level in Colorado where communities are complaining about noise and odors, on the state level as regulators grapple with public anger over deadly accidents, and on the federal level where a new administration is committed to cut over-regulation of the oil and gas industry in the interest of freeing up oil and gas development.